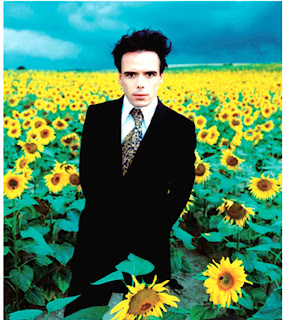 Sebastian Horsley (left), the eldest son of the late British food magnate Nicholas Horsley, died on June 17 from a heroin overdose.  He was 47-years-old.
Known for an upbringing filled with "atheism, alcoholism and insanity," Horsley was an artist, a self-described "Dandy" fashioned in the mold of Lord Byron and Oscar Wilde who is probably best known for his failed, and nearly fatal, crucifixion attempt in the Philippines 10 years ago to prepare, as he put it, for a series of paintings on the subject.
Fame, in an odd twist, did not bring a great deal of wealth.  He often complained of being broke, with most of his money being spent on drugs and prostitutes while squandering the rest.
"Eccentric," from what I found, is the term used most often to describe this destitute character.  While one could argue that it describes him perfectly, I find little eccentricity in such a tragic figure whose odd fixation with human skulls, prostitutes, and especially alcohol and narcotics ultimately led to his demise.
There is nothing eccentric about self-destruction.  Horsley was a lost soul and social iconoclast who never found what he was looking for.  Yet wherever his spirit may roam, we can only hope that Sebastian Horsley is now at peace.
Posted by AMW at 9:45 PM

I agree in that I always think of eccentricity as being a little deeper than the "dandy" you have pictured here, but then again maybe he was just misunderstood. Hope he finds peace, like you said.

My sentiment (about eccentricity) exactly. In using the term in the title to my blog, I consider all things "eccentric" to be less outlandish and more subtle and vibe oriented. Hopefully that's come though in at least some of my posts.

I am not sure where you're getting your information, but great topic. I needs to spend some time learning much more or understanding more. Thanks for excellent information I was looking for this info for my mission.