A time for choosing (w/ apologies to our 40th President)

Early last Saturday morning, some time around 5:00 AM, I staggered into the Kroger at the corner of Sanderlin and Mendenhall (overshadowed by Clark Tower) after another glorious shift of getting drilled at the World Hub.  My habitual walk through the periodical aisle brought to my attention a book called "Saved By Her Enemy," which tells the story of an Iraqi Muslim woman who, in her attempt to avoid the Islamic insurgents trying to kidnap her, ultimately found herself embraced by the kind of Christian family in the American heartland she was taught to hate.  Score one for the good guys. 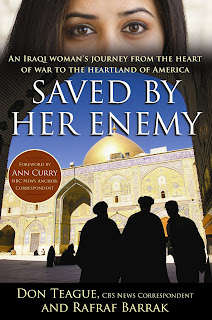 Pondering what non-extremists endure from their fellow believers reminded me of a post from last April about what Christians in Muslim-dominated countries face practically every day.  Similar to a recent story 60 Minutes did about Archbishop Bartholomew of Constantinople, another piece of mine from last March also told of the threats our brothers and sisters in Christ have experienced for centuries.

Jihadist provocations against Christians in the Nigerian town of Jos earlier this year is just one of many examples of how rhetoric about the world's two largest religions learning to coexist essentially crumbles beneath the opposing mechanisms that define the two faiths, all of which lends additional legitimacy to "Islam's 20-year plan" identified by Anis Shorrosh in 2003.

More specifically, consider the Christian man who was raped and murdered in Pakistan last year for refusing to convert to Islam.  Think of the additional consequences non-converts face in Islamic-controlled societies.  Ponder how such an ideology is penetrating its way through our nation, and then ask yourself one question:


Where do I want to live?
Speak of "tolerance" if you like, but tolerance is rarely reciprocated on their side of the aisle.  Considering the peculiar sensitivities of Muslims, their open desire to implement Sharia law in the United States, and the historical trend of aggression in every society Islam has penetrated, the answer is self-evident if only you dare to be honest.

"Sons of Islam everywhere, the jihad is a duty - to establish the rule of Allah on earth and to liberate your countries and yourselves from America's domination and its Zionist allies, it is your battle - either victory or martyrdom."
-- Ahmed Yassin (1937-2004), founder of Hamas, an Islamic organization and political party known for using suicide bombings as a means to facilitate the destruction of Israel and their allies
To add, here's a piece from CBN News.  And for more, check out Jihad Watch and The Religion of Peace.
Posted by AMW at 9:18 PM