Sunday's Quote: A national conversation about what exactly?

President Obama recently called, once more, for a "national conversation" about race, which follows Attorney General Eric Holder's infamous "nation of cowards" comment regarding our purported fear (read: apathy) in addressing the matter altogether.  The quandary itself arises, practically as a rule, when such an enigmatic topic centers upon mere skin pigmentation instead of mentality, or "social justice" rather than social philosophy.
Aimed at assessing blame on issues that are customarily narrowed to focus on slavery -- an institution appropriated by every culture at some point during the past four millennia (that's 4,000 years for you brainiacs) -- it seems that many foresee a national conversation that establishes a benchmark for the rabble-rousing firebrand and a whipping post for the grossly uninformed.
A good writer recently expanded on the topic:
"People who advocated welfare reform in the 1990s were accused of being 'racist.'  If you're for border control, you're 'racist.'  If you criticize Obama, you're 'racist.'  If you oppose quotas, you're 'racist.'  If you say that, be it nature or nurture, there are differences among groups, you're 'racist.'  If you want English to be the national language, you're 'racist.'  The word has become meaningless, used only to stifle and stigmatize opposition.  And if calling you a heretic worked in that regard, the left would do that.  And if calling you a Fig Newton worked, they would do that. ... 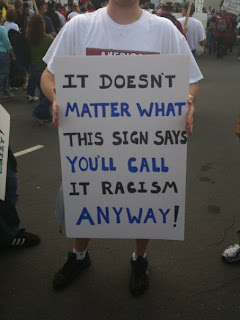 "And understand something else: Leftists are cowards.  They are creatures of the pack, finding their strength only in numbers.  After all, what do you think being politically correct is all about.  It means doing what's fashionable in our time, what makes you popular.  A man who believes in Truth, such as Thomas More, will die for his principles, alone, twisting in the wind.  A liberal goes the way the wind blows and will die for nothing.  Stand up to leftists en masse, and they'll fold like a tent.
"So free yourself.  Laugh at the 'racism'  shtick.  Make it a badge of honor.  Call leftists what they are: cowards, bigots, liars, demagogues, and worst of all by far, enemies of Truth.  Fight fire with fire.  Remember, millions of good Americans are sick and tired of political correctness and will stand with you.  So just say to our leftist legal aliens: If you like name-calling and you want to fight, OK.  I'm a racist, sexist homophobe, and I'm in your face."
-- from "Hello, I'm a Racist, Pleased to Meet You" by Selwyn Duke; July 22, 2010
And one more, just to nail the point:
"I hope that one day African-American politicians will finally achieve racial equality and that they, too, will be punished for their ethical lapses just like people of no color are."
-- Rush Hudson Limbaugh III; July 29, 2010
Posted by AMW at 10:32 PM