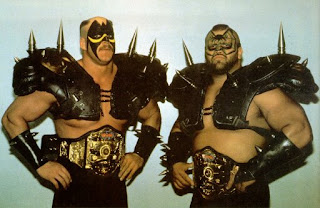 Decades before professional wrestling grew into the multi-billion dollar conglomerate it is today, the territorial outfits of yesteryear -- a kind of mid-major league system -- such as the AWA, the CWA, and the resulting USWA flourished for generations in heartland areas throughout Indiana, Kentucky, Missouri, Arkansas, Tennessee, Mississippi and Texas.  Indeed these men, who ravaged their bodies for next to nothing, were iconic figures to middle Americans that lived vicariously through these heroes of the squared circle who routinely did what few ever dared. 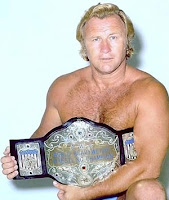 I was parked in front of the television every Saturday morning for God-knows how many years to marvel at 90 minutes of live wrestling from WMC-TV studios at 1960 Union Ave. in midtown Memphis, just a block or two from the Cooper-Young district.  And just as enthralling were highlights from the previous Monday night shows at the Mid-South Coliseum.

Long before the WWE was "Raw" on Monday nights, nothing could hold a candle to what rasslin' fans from the tri-state area witnessed in the same arena that Elvis Presley, The Beatles, Jimi Hendrix, Led Zeppelin, KISS, AC/DC, Lynyrd Skynyrd, The Rolling Stones, Eric Clapton, ZZ Top, Black Sabbath, Aerosmith, The Eagles, Bruce Springsteen, Van Halen, Metallica and a slew of others once performed.
If you're not familiar with the Mid-South Coliseum, that's where Jerry "The King" Lawler pounded Andy Kaufman into unconsciousness (or so it seemed) just two years before the eccentric comedian passed away.  Surely you remember.
Many of the all-time greats came though Memphis with noticeable regularity.  Harley Race, Nick Bockwinkel (above left), Terry Funk, Ken Patera, The Road Warriors (above), the Von Erichs and Rick Martel made their mark in the Bluff City, as did Hulk Hogan, Jesse "The Body" Ventura, "Nature Boy" Ric Flair, "Macho Man" Randy Savage, Dwayne "The Rock" Johnson and "Stone Cold" Steve Austin. 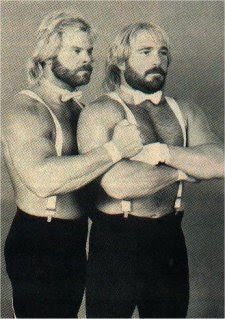 Others who have their face etched on the Mount Rushmore of local rasslin' lore include Dutch Mantel, "Superstar" Bill Dundee, the Rock 'n' Roll Express, Jeff Jarrett, The Fabulous Ones (right), Austin Idol, and the man who appeared in every main at "The Roundhouse" for over 15 years, Jerry "The King" Lawler (below).
Past-their-prime venues and a lack of appealing talent to even the most loyal and hardcore ultimately led to the demise of heartland-based promotions.  So far reaching was the impact of corporate wrestling (the WWE, who now signs Lawler's paychecks, is the proverbial last man standing) that even the best nostalgia shows are now fortunate to bring in 2,000 fans.

I, myself, lost interest long ago.  Yet "real" or not, the entertainment value of senseless, predetermined violence was always in question, but never in doubt. 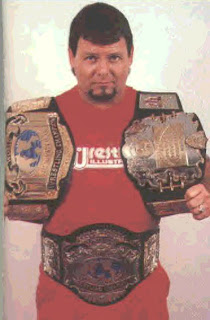