There I go again 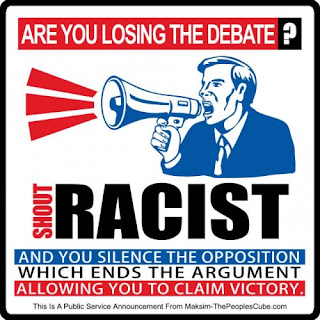 The illegal alien contention in Arizona has many people (like me) fuming over the idiocy demonstrated by two kinds of people: 1) those who continue to demand the amnesty path to citizenship, and 2) those who appear more concerned with how they might be labeled instead of enforcing the laws that were in place long before SB 1070 took effect.
Adding to the mix, a recent AP report summarized Arizona Governor Jan Brewer's signing of a new bill that targets ethnic studies.  Says the Associated Press, "State schools chief Tom Horne, who has pushed the bill for years, said he believes the Tucson school district's Mexican-American studies program teaches Latino students that they are oppressed by [W]hite people.  'Public schools should not be encouraging students to resent a particular race', he said."
I couldn't resist adding my voice, once again, to the thousands of comments on this story alone.  In a brief offering (that received 19 "thumbs up" and four "thumbs down") I wrote the following:
"Oppressed by White people?  Anyone who feels this way should do the following: 1) Leave America.  2) Go to Mexico.  3) Discover real oppression.  4) Come back to America.  5) Teach our children about real oppression."
Someone named "Dan," purportedly a 55-year-old from California, thew me a comment: "You obviously feel you are entitled!  Is there fake oppression somewhere in the world?"
I studied his ill-prepared statement for a moment.  Still unsure of what he was getting at, I fired back:
"You evidently gave little thought to your rebuttal.  But yes Dan, I am entitled.  I am entitled as a citizen of the United States -- as guaranteed by the First Amendment -- to speak against any invader that attempts to dominate by employing guilt-trips, false labels and double standards in order to demand legitimacy without proper grounds for this, or any comparable claim.  Against such hypocrisy, I will always stand."

I'm not a bigot because I choose the welfare of this nation over hypersensitive nonsense.  So call me a racist, or whatever makes you feel good because I'm over it.
Posted by AMW at 5:13 PM

Of course this is about race, what else could it be. Surely isn't about the rule of law or us being a sovereign country or anything of the sort.

Dear God, when will the radicals just come out to say it, that they don't care for out laws,and want an internationalist community of bumbs

I guess we might as well buy the racist t-shirts and wear them with pride. I've been called so many names it's almost comical. This past Tuesday someone asked me if I was Chinese because I had those slanty eyes. Funny - that was in church. Great post and Conservative Scalawag is right - just come out and say it-

When you break it all down, name-calling is all they really have. Withstand that, and the rest is easy.