A couple of recent posts have dealt with the growing tensions involving illegal immigration.  Here's another:
Several students at Live Oak High School in Morgan Hill, California (near San Francisco) were recently told to remove their shirts because Live Oak officials felt the depiction of the American flag during Cinco de Mayo was disrespectful to the sensitivities of Hispanic students.  Perhaps this is where I would insert a bit of irony-based sarcasm, but at present I am unable to find words adequate enough to explain such profound absurdity.
Some 400 miles south on the UCLA campus, Santee Education Complex history teacher Ron Gochez (Google him) recently offered a fiery diatribe in which he boldly referred to "a global struggle against imperialism and capitalism," "where we now stand is stolen, occupied Mexico," "frail, racist White people," "at the forefront of the revolutionary movement is La Raza," "they know that we will no longer fall to these lies called 'borders'," "we see ourselves, all of us here, as the northern front of a Latin American revolutionary movement," "40 million potential revolutionaries north of the border inside the belly of the beast," and "we are a culture of revolutionary spirits."
Here's his speech in its entirety: 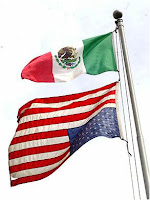 Although this contention is reminiscent of the Montebello High School flag incident (near Los Angeles, pictured) in March 2006, it remains difficult to comprehend that a history teacher, regardless of background, would so readily overlook the Texas Annexation of 1845 (leading to the Mexican-American War, which we won in under two years), the Mexican Cession of 1848, and the Gadsden Purchase of 1853, all of which make the areas in question -- especially present day Arizona and California -- the legal and rightful territory of the United States.
Yet this new breed of revolutionary, filled with every sort of emotion and vitriol, will continued their charade of patriotism and equality until the defenders of our sovereign nation -- from sea to shining sea -- become enlivened enough to see this movement for what it truly is.
Note: The second of the two clips originally posted was removed by YouTube because it was an unapproved promotional for a big budget movie about a native Mexican sent to assassinate a politician (played by Robert DeNiro) whose platform centers on sending illegals back across the border.
I'm glad the movie isn't about a Minuteman picking off illegals, or else that would be controversial.  I guess we should be glad the movie doesn't focus on Mexico's draconian immigrant laws, or else that would be racist.
Posted by AMW at 6:33 PM

Heard about this idiot on Boortz this morning, but first hearing or seeing this movie.

In my opinion, the teacher is a commie union stooge, who should be fired,then arrested on sedition. But will likely not be out of political correctness.

The movie, well - what do you expect from the useful idiots that make up Hollywood?

Again, I'm taken aback by the double standard. They would be raising HELL if a half-million Americans poured into Mexico specifically to drop anchor and demand citizenship without a legal or ethical leg on which to stand.

Here is my site: weight management