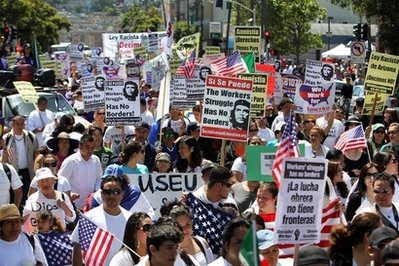 Do these demonstrators in Arizona believe the delineation of a Marxist like Che Guevara, who fought alongside Fidel Castro in a Cuban revolution that created a one-party Socialist/Communist regime, really helps their cause?  Perhaps this, all by itself, adequately explains the divide between those who have an issue with nearly a half-million illegals in one State, and those who demand citizenship without a legal leg on which to stand.
© Associated Press
Posted by AMW at 8:10 PM

I honestly believe they do or this is what they are being told...and like lemmings...sign on without question. I'm amazed at the Socialist Marxist movement in America. It's hate to say one must come to America via the legal path? Wow, I'm just amazed at what I'm seeing these days.

Che's a hero, you're a douche.

Hey "Anonymous," I'm assuming you're the type who appreciates the perception of the underdog revolutionary who stands up to, and defeats, the oppressive establishment. But in fact Guevara's 26th of July movement, for which you clearly place him on a pedestal, has resulted, directly and undeniably, in a national suffocation that doesn't even compare to what Cuba faced when Batista was in power.

I know Che saw some bad stuff in his younger years, but you really have to overlook a LOT to call him a hero. Nice try, but your insult is generally based on fantasy and it doesn't move me at all.