If I could only get there 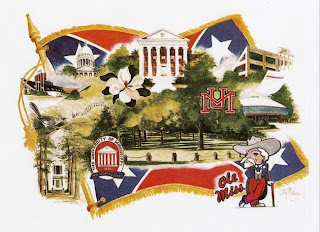 I visited the Ole Miss campus in Oxford, MS earlier this afternoon.  Having arrived too late to catch the last portion of the Oxford Conference for the Book (John Grisham spoke Friday), I decided to make the most of my southward journey by exploring the campus and surrounding area.
Depending on where you're coming from, Oxford is one of the few places by which the quickest way there requires perhaps the most asymmetrical path.  Common sense for the average Memphian insists that a straight shot down I-55 South would be easier than taking the back roads of US-78.  But that, of course, is wrong by upwards of 20 miles (no matter what Google Maps discloses), and I should know better.
Time spent on campus during football seasons past has afforded a firsthand knowledge of the alluring intangibles that make Ole Miss both comfortable and exceptional, whereupon I was pleasantly reminded as I parked in front of Farley Hall and the Overby Center for Journalism and Southern Politics, which stand adjacent to a 10-acre patch of sweet Mississippi goodness known simply as "The Grove."
Last Monday's unexpected passing of renowned author and Ole Miss MFA program director Barry Hannah almost brought the conference to a halt before it was scheduled to start.  Organizers ultimately moved forward in Hannah's honor, and though I had intended to hear at least a few of the lectures -- especially the ones centering upon writing about politics and racial identity -- I suppose my intrinsic longing to get back to Oxford after a longer-than-expected hiatus fueled my return as much as anything else.

I gleamed with a possibly misplaced sense of delight amid my campus stroll, almost placing myself in the shoes of an alumnus, as I observed the new and in-progress buildings that compliment signature establishments such as The Lyceum, Ventress Hall, the Barnard Observatory, and Vaught-Hemingway Stadium.  I'm assuming the nonchalance I have always felt at Ole Miss inspires an affinity that wouldn't otherwise be present.
I eventually made my way off-campus to The Square not long after an exchange at the student union with a delightful Southern beauty, the kind which a guy such as myself aspires to one day bring home to mom.  The vestiges of winter began to linger as the sun descended while I casually floated from Square Books, to Off Square Books, to Oxford city hall where I finally came across that statue of William Faulkner sitting on a park bench that, for some reason, had eluded me for so long.  And somehow, that was the ideal way to end my brief time in Lafayette County.
Having read this far, you are likely wondering why I place the Ole Miss establishment on such a high pedestal.  Some of the reasons have been explained in the preceding paragraphs, but there also exists an academic angle of which I've rarely spoken.

I have a degree from Southern Illinois University ('04) hanging in front of me as I write this, which I look upon with some level of contempt because it serves as a reminder of mistakes and misfortune that cost me a fulfilling "college experience."  In short my best college memories have little to do with the University of Memphis (where I did most of my undergrad work), and they have nothing to do with Southern Illinois -- a campus I've never visited.  Believe me, it's a long story.

Even as a lifelong devotee to the University of Tennessee (the flagship school of my home State), I can say unreservedly that to do it all over again -- as if that were possible -- would have me battle against any obstacle to get myself down to Oxford to make the most of what the University of Mississippi has to offer.  I can only ponder what might have been, and while there are infinitely worse tragedies in this world, this is one instance for which the only reality, despite my daydreaming, is regret.