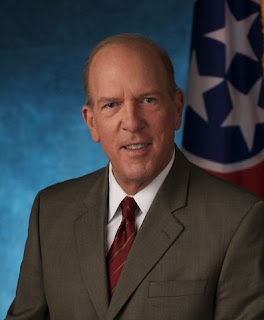 Tennessee is home to the moderate Democrat, perhaps more so than any other state, which was predicated by governors Ned McWherter ('87-'95) and Phil Bredesen ('03-present), both of whom were preceded by a streak of 11 consecutive Democrats who resided over the State Capital from 1923-1971.
While I believe that a vote for a politician is a vote for both that person's party and his/her supporters -- a philosophy that justifies my leeriness of the Left -- I also believe that my home state could do worse than electing Ned McWherter's son, Mike (pictured), in the coming November election.
Call me a sellout if you like, but when a Republican candidate -- current Knoxville mayor Bill Haslam, in this case -- reminds me of John Edwards for reasons I cannot fully explain, then it could be time for this particular voter to weigh my options... for once.
Posted by AMW at 8:01 PM