Predictable in all his ways 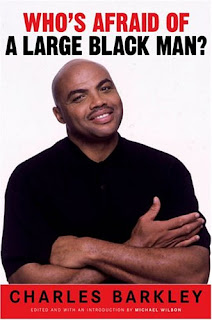 I suppose this falls beneath the parameters of the most recent "Sunday's Quote"...

A few days after August National chairman Billy Payne criticized Tiger Woods for his off-the-course behavior, particularly in regard to how Eldrick's younger fans might react, Charles Barkley offered the following rebuttal:
"Then you got this punk ass Billy Payne who goes on TV yesterday.  First of all, he ain't told his kids to be like no Tiger Woods.  Let's quit kidding ourselves.  He ain't told his grandkids and kids to be like Tiger Woods.  And for him to get on there and act like he's old Uncle Tom, he's the master on the plantation, that pissed me off.  And I wish somebody would just walk up to him and punch him in the face."
Barkley should be reminded that the title character in Harriet Beecher Stowe's all-time classic was Black, not White.  In fact the premise of Stowe's novel was intended as an argument against slavery.  It was years later in the adaptations that followed in which the original perception was altered substantially, often rendering Tom as a subservient race traitor.
But then, I doubt any of that matters to Chuck.
Posted by AMW at 9:03 PM