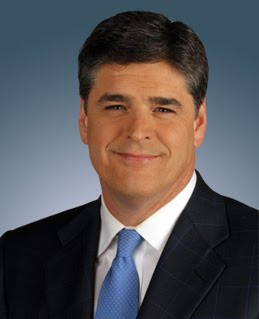 Provided the current administration maintains the Far Left ideological path that a considerable percentage of those who voted for Barack Obama did not anticipate, today marks 1,000 days until BHO leaves the White House.  And yet, despite this momentous future occasion, most of my political meditations at present center upon FOX News anchor Sean Hannity.
Some of the Republican faithful will have to forgive those of us who aren't doing cartwheels over the purported list of presidential contenders, but the Right Wing intelligencia -- as compared to the mob mentality of their Leftist counterparts -- is indeed strong enough to sustain criticisms from its own.  Although the purveyor of this humble blog is among the most reluctant GOP adherents you may ever meet, The Eccentric Conservative must take issue with one who, at the very least, is not afraid to throwdown with adversaries that have never represented a legitimate political alternative for those who believe in the Constitution as intensely as they believe in the Holy Bible.
Proclaiming to be "burned out" or "sick and tired" of both parties has become trendy (however warranted), to the point that some end up claiming to be Libertarian -- which comes from a wish to think and act outside of the unremitting Republican vs. Democrat box -- without knowing what the third party label fully entails.  Times such as this usually spawn an uprising by the minority party, but something is different now.
As politicians and their like-minded advocates in the media continue the chicanery for which they are increasingly scorned, the American electorate has become more than "burned out."  The people are jaded, more cynical than ever, increasingly unafraid of labels, and yearn for a tangible kind of change that both transcend mere skin color and does not include taking the United States down a path that will eventually have this country, for whom God undeniably shed His grace, mirroring portions of Europe ... or worse.
This is the arena in which Republicans typically capitalize, but they have floundered thus far.  We will know more by the November midterm elections, but for now it seems the Right is struggling to find its way.  Politicians will do what they always do, and that may never change, but media personalities may offer a more comprehensive perspective into this ever-growing animal.

Sean Hannity, for example, labeling the national fiscal crunch as "the Obama recession" before the man had taken the oath of office clearly exceeded the bounds of partisan hackery, but challenging Obama's "man of the people" mantra when a tape surfaced of the future president ordering Grey Poupon on his sandwich was possibly worse.  Instances such as these, of which there exist many, have become Hannity's chief impediment and they do nothing to help his cause.
Volumes have been written about the Left Wing media, and their tactics are reprehensible.  Keith Olbermann, Roland Martin, and Chris Matthews make some of us angry just by appearing on the television screen.  Yet the Dems will continue to succeed if the Right only continues to offer comparable tactics and diluted versions of what is already being offered by the Left.  Ultimately the choice is theirs.
Posted by AMW at 9:25 PM

A coalition sounds like a good way to have them all working hard again.

In all honesty Mo, we've tried everything and nothing seems to work. In the end, it seems partisan hackery always wins out.