A century-and-a-half ago today... 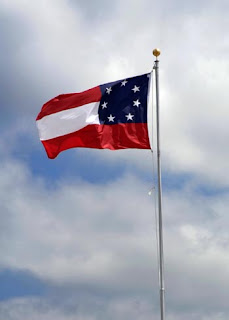 On April 12, 1861 at 4:30 a.m., approximately 500 soldiers representing the seven States of the newly formed Confederacy, by command of General Pierre G.T. Beauregard, opened fire on Fort Sumter in Charleston, South Carolina and continued their bombardment for 34 hours.  Over 600,000 of America’s finest would die in the four-year insurrection that followed.

Worldwide more than 200 civil wars have been fought in just the past two centuries.  Poor people rising up to fight, suffer and die so the more prominent minority could keep their slaves would be the first campaign of its kind in the history of the world – and this is exactly what many have been commanded to believe of their regional kinfolk and defenders for generations.

Of course those who wished to keep their slaves absolutely existed.  The perspective of many among the wealthy and politicos is clear.  But how does one enliven such an appreciable uprising of mostly underprivileged, non-slave-holding Southerners who knowingly faced impossible odds to draw arms against their brethren of the North for the sake of maintaining an institution that was perpetuated by a mere 6% of the populace (according to the 1860 U.S. census)?

Abraham Lincoln, who did not amend his long-held stance on human servitude until it became more politically expedient, called for 75,000 volunteers soon after the Stars and Bars had been raised over Fort Sumter, almost instantly triggering the unforeseen secession of four additional states to join the Confederacy, including Tennessee, which had initially voted by a considerable 4-to-1 margin to remain with the Union.  So why the sudden change of heart?

Make no mistake, both sides are responsible for reinterpreting facts to support their own conclusions.  Yet from the lowest enlisted soldier, to the highest ranking and most renowned generals, an ambition to keep an entire race of people in shackles is noticeably absent in their correspondence.  Dismiss that as spin if you like, as the debate itself all too often centers more on demonization than comprehensive veracity.  As a direct consequence, advocating a broader understanding of a matter such as this is frequently rejected without a second thought.

Fatefully perhaps, some of that blame falls on the unrestrained Southerner who flew the Banner for motives that were never typified by Lee and Jackson.  That said, individuals and groups who fly a flag to exhibit a disdain of anyone do not require a symbolism of any kind to demonstrate their brand of contempt.  Truly such people would hate without it.  In fact, if the Confederate States and all its relics had never existed, they would still hate.

And let us be especially honest about this.  America currently has a bevy of racially-based issues throughout New York, Boston, Philadelphia, Baltimore, Cleveland, Detroit and Los Angeles, among other metropolitan areas.  Yet it is the former Confederate nation that is hit with the inclusive liability of all racial matters while virtually all others are given a pass.

The duality of being both Southern and American can be a burden, but it's anything but a curse.  So I ask the nay-sayers: Is it easier to reject this sentiment as a neo-Confederate fantasy, or is it simply too inconvenient, or problematic, to consider the possibility that maybe the unpleasantness of the time wasn't entirely about you?

Later in life, General Beauregard – "The Hero of Fort Sumter" and the fifth-most senior general in the Confederate army – declined offers from both Egypt and Romania to take command of their respective armies, saying "I prefer to live here, poor and forgotten, than to be endowed with honor and riches in a foreign country."  If a more definitive statement about love of home and region has ever been made, I have not seen it.  In the end, perhaps those dastardly Southerners were merely culpable of loving the Southland just a little more than you.
Posted by AMW at 9:03 PM