Gone (officially), but far from forgotten 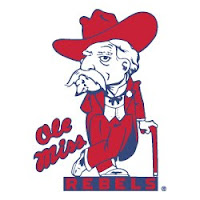 I walked into a gas station this morning around 4:45 a.m. for a pick-me-up to recover from my nightly beating at FedEx when I observed a Commercial Appeal headline that I've been anticipating for some time.
Back in 2003 when the Colonel Reb mascot contention first reared its ugly head, I traveled 70 miles south to Oxford, Mississippi for five of the Rebels' seven home games to assist a fledgling upstart called The Colonel Reb Foundation with the intention of drawing awareness, at the very least, to this self-inflicted issue that originated from then-Ole Miss Chancellor Robert Khayat.  Little was accomplished ultimately, but it was refreshing to find more support for the Colonel than the apathy I initially expected.
In the administration's defense, one of the two replacement options wasn't that bad; "Rebel Bruiser" was a somewhat younger and more upright version of the Colonel with bulging biceps, a mischievous grin, and strangely enough, a midriff-bearing shirt that would look more appropriate on the likes of Britney Spears (in her breathtaking prime, of course).

It was clear from the beginning that the Colonel's "outdated image" (the original rationale for his removal) was a shroud for something deeper.  Although every poll has shown overwhelming support for the Colonel, many detractors continue to stand on the premise of slavery and segregation as cause for his elimination -- ironic considering the often disregarded cultural imperfections typified by those who insist that Colonel Reb is but a reminder of slavery.  Indeed a relatively brief (but painfully honest) assessment of history exposes the hypocrisy of such claims in mere moments.
UM brass continue to promise that "Ole Miss" and "Rebels" will remain part of the University lexicon, but it is only a matter of time before these tribal identities become subjects for derision as well.  And once they, too, are eliminated, the Ole Miss that many know and love will be officially gone forever.
Posted by AMW at 9:17 PM