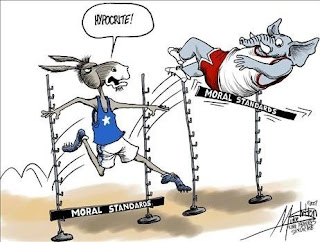 Carrie Prejean has endured a nearly unprecedented barrage of criticism for not endorsing same-sex marriage during the Miss USA pageant last April. Having finished first runner-up in Miss USA, she was dethroned by Miss California officials two months later for "continued breach of contract." Additionally the ambiguous reason behind her de-crowning was largely the end result of "celebrity blogger" Perez Hilton's smear campaign.


Hilton (born Mario Lavandeira) is the one responsible for asking Prejean the now famous question about gay marriage during the Miss USA pageant. His militant disapproval of her reply led him to make a variety of disparaging claims against Prejean soon after, which included referring to her as a "dumb bitch" -- and all because she offered the same defense for traditional marriage as the Liberal Democrat who now occupies The White House.
It should be noted that Perez Hilton released his first song in September 2008, a single about Gonorrhea called "The Clap."  During any other time, this fact alone would be enough to nullify any perspective he would ever attempt to impose upon others.
This controversy is no different from the mass of insults Sarah Palin continues to tolerate a full year after Barack Obama's election became official. As if her electoral defeat wasn't enough for Palin's detractors, it seems the Left wanted to make an example of her, just as they have Carrie Prejean. And why? Because Palin and Prejean (among others) dare to endorse a standard found only in the Holiest of all books even despite their past imperfections.
They are talented, accomplished, poised under intense scrutiny, honest and imperfect, and not filled with the rage that consumes their Left Wing counterparts -- a fact conveniently overlooked by those who find it easier to dismiss non-"Progressives" as hypocritically divisive hate-mongers.
Without question, my girl Carrie -- who turned down $140,000 to pose for Playboy -- has made a few errors in judgment that have been well-documented by those who celebrate those shortcomings. Yet Conservatives are evidently more capable of recognizing the difference between making mistakes and cultivating mistakes, and that will always lead them down a path separate from political correctness and social hypersensitivity.
Posted by AMW at 6:55 AM